Nigeria Scrabble Federation (NSF) officials and the National Scrabble Team are prepared to retain the Africa Scrabble Championship title at the 14th edition starting in Lusaka, Zambia on Friday 21st October 2022. The NSF President Engr Olobatoke Aka said this in an interview with the media on Monday, just before jetting out with the national team to Zambia for the tournament.

The national team arrived Lusaka, Zambia on Tuesday 18th October in high spirits along with the senior team coach Anthony Ikolo and the Secretary General, the Vice President and the NSF President who is the leader of the team. 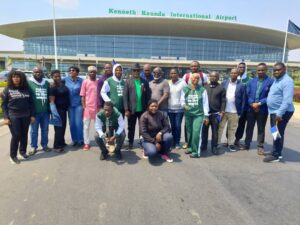 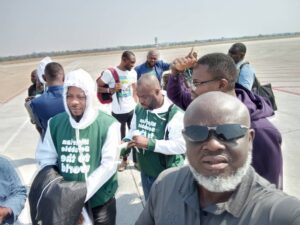 The tournament commences on Friday the 21st and runs through Monday the 24th of October 2022.

Nigeria yet again proved to be the dominant force in African Scrabble by retaining the Africa Scrabble Championship title at the 13th ASC held in Kenya from November 28 to December 2, 2018. The National Scrabble team took the top three positions at the 4 day event won by current National Champion (2018) Moses Peter who had 26 points and a spread of +2051. Former African champion Jighere Wellington was first runner-up with 22 points (+2083) while Eta Karo came third with 21 points (+88). Four other Nigerians were also placed in the top ten (10) positions at the end of the 32-round tournment ensuring that Nigeria also successfully retained the Best Team title won in Ghana in 2016.

The new champion Moses Peter (who was also team captain of the squad) displayed the strong form that won him the National Scrabble Championship title earlier this year (July 2018) and runner-up at the WESPAC Championship last year (November 2017) from the start of the tournament. He won his first 5 games and was consistently among the top 5 on the standings to the very end, a feat that ensured he had effectively won the title by round 30 with 2 games to spare.

Other members of the team performed brilliantly, with members of the team in the 5th, 8th, 9th, 10th, 15th, 25th, 26th and 38th positions ensuring that 7 Nigerian were in the top 10 prize table. Sixty-two players from seven African countries attended the tournament. The countries are Nigeria, hosts Kenya, Uganda, Sierra Leone, Gambia, Tanzania and Zambia. At the end of the event, team Nigeria topped the team performance charts with a mean spread of +1722, an average rank of 3.8 and a win rate of 63.73% playing against players from other countries. Kenya took the team runner-up position with a average spread of -626.2, an average rank of 10.0 and 46.98% performance against others.

Scrabble Kenya and the Pan African Scrabble Association (PANASA) invites all member federations to the 13th (thirteenth) edition of the Africa Scrabble Championship holding in Kenya.

The event is based on country representation.

The event will be held from the 28th November to 2nd December 2018 in Kirinyaga County. Kirinyaga County is a county in the former Central Province of Kenya. Its capital is Kutus and its largest town is Wanguru. In 2009, the county had a population of 528,054 and an area of 1,205.4 km². It is a one to two hours journey from Nairobi.

Each country will field the qualified fifteen players following the country-specific selection process (an additional 5 wildcards can be fielded in consultation with the PANASA secretariat).

The registration fee is $250 per player with country registration at $100 per federation. A total of 32 games will be played over 4 days with awards for the top 10 and country trophies.

To this end, the Nigeria Scrabble Federation has written to the Federal Ministry of Youths and Sports Development for sponsorship.

Team Nigeria will depart for Kenya on Monday 26th November to defend her title won in 2016 (Ghana) by Saidu Ayorinde.

The National Senior Team Coach of the Nigeria Scrabble Federation (NSF), Mr Ikolo Anthony has invited twenty-two players to 5-day training camp in Port-Harcourt. The camping in collaboration with Total E&P Scrabble Club, Port-Harcourt is part of the process to select the teams that will represent Nigeria at this year's Africa Scrabble Championships, World Scrabble Championships and the Alchemist Cup holding in Gambia, England and Malaysia respectively. The camping will be held between the 21st - 25th of May 2018 at Total E&P Staff Club, Ogoja Street Amadi Flats Old GRA, Port Harcourt. Rivers State.

Four (4) players were given wild cards

Three (3) players were invited based on outstanding performance in recent tournaments and club retreats. They are:

Players will be provided accommodation, feeding (at least 1 free meal/day) and tea breaks as necessary.

It was the last day of the thirty-two round 4 day tournament and the new king of Scrabble in Africa was about to be crowned. Nigeria had taken a formidable team of 21 players to the tourney including 4 previous winners of the tourney viz Ikekeregor Dennis (2004,2006), Jighere Wellington (2008,2010), Rex Ogbakpa (2012) and the defending champion Nsikan Etim (2014). Team Nigeria's performance was looking good going into the last rounds with at least eight out of the top ten places occupied by Nigerians with two Kenyans (Njoroge Stanley and Nderitu Gitonga) giving Team Nigeria a run for her money.

5th seed Ayorinde Saidu had displayed his intention of being a serious contender for the African title by establishing a foothold among the top 5 midway into the tourney. By round 20 he had usurped compatriot Oshevire Avwenagha from the top spot. From that round onwards he parried all attempts to displace him from the summit, the strongest and most consistent threat coming from 6th seed Nderitu Gitonga. Gitonga eventually caught up on points with Saidu after winning round 29. They had equal wins (20 wins each), Saidu however had superior cummulative margin and they they were to face each other again in round 30. It was evident that whoever won the next round will have the edge going into the final two. Round 30 proved to be dramatic! Leading Saidu 380 - 317 with no tiles left in the bag, Nderitu chose to play GUTCHES* an unacceptable word which was challenged off instead of blocking the only spot where Saidu could play a bingo (i.e use all his 7 tiles). That was all Saidu needed to play RAILERS a bingo and win 423 - 380 to regain the 1 point lead. You can play back that game. After dispatching former Africa Champion Rex Ogbakpa 575 - 479 in the penultimate round (round 31), Saidu had established an unassailable lead of 2 points (23 wins, 9 losses) over the nearest competitor becoming the 12th African Scrabble Champion and the 11th Nigerian to win the title.

Nigeria's Eta Karo (10) beat 4th seed Ogbakpa Rex in the last round to finish as the first runner-up (2nd) while 13th seed Umebiye Cyril dispatched Nderitu Gitonga 489 - 393 to finish in 3rd place. Nigeria was also adjudged the best team with a mean post-tourney rank of 17.7 followed by Kenya and Ghana in that order.

Nigeria dominated Africa Scrabble with yet another superlative performance at the 11th edition of the Africa Scrabble Championship (ASC) held in Cape Town, South Africa from the 25th - 28th of October 2014. Mr Nsikak Etim of Nigeria became the eleventh (11th) Africa Scrabble champion and the eighth (8th) Nigerian player to win the prize award of USD 5000 (five thousand dollars). After thirty-two (32) rounds of Scrabble spanning three days in a field of 62 (sixty-two) players, he won 22 games with a cumulative spread of +1725 to beat compatriot Olatunde Oduwole (21 points +1436) to the second (2nd) position. Prince Omosefe with 21 points and a spread of +1077 placed third (3rd) to complete Nigeria's sweep of the top prizes at the ASC 2014. Mr Etim's performance takes Nigeria's ASC title haul to 10 (ten) out of eleven editions of the championship since it's inception in 1994 in Kenya.

Nigeria took the top nine position with Messrs Dennis Ikekeregor, Ayorinde Saidu, Karo Eta, Moses Peter, Kabir Olaiya and Owolabi Lukeman in that order placing fourth to ninth. This feat which earned Nigeria the overall best team award. Mr Dokun Esan carted home the highest win award of USD 100 for his 650-291 win against Dennis Ikekeregor. Former African champion (2002) and the only non-Nigeria to ever hold the title, South Africa's Hovelmeier Trevor took the 10th (tenth) position to complete the top ten best Africa Scrabble players at the end of the tournament. The next edition of the event will be held in 2016 in Gambia.

Top Nigerian Scrabble players and officials have arrived Cape Town, South Africa venue of the 11th edition of the Africa Scrabble Championship. The event starts from the 25th of October and ends on the 28th of October, 2014.  The team led by President of the Nigeria Scrabble Federation, Alh Suleiman Gora is expected to repeat Nigeria's dominance of the game in Africa by retaining the trophy won at the 10th ASC by Rex Ogbakpa the defending champion who is also a member of the current team. Nigeria has won 9 of the previous 10 editions of the championships. Two members of the Nigerian team Jighere Wellington and Ikekeregor Dennis have been crowned Africa Scrabble Champion twice.  62 players representing 6 African countries are participating at this year's championship.

Nigeria has won the 2012 edition of the African Scrabble Championship held between the 22nd - 26th of November in Livingstone Zambia. The championship (the 10th edition) was won by Rex Ogbakpa a member of the Nigerian contingent which consisted of 12 players and 4 officials. 4 countries competed at the tournament viz Kenya, Nigeria, South Africa, Uganda and host Zambia with a combined total of 49 players. Rex Ogbakpa runner-up at the 2012 Godswill Akpabio Int. Classics and a member of the Uyo Scrabble Club achieved the feat by winning 21 (+1639 margin) of the 30 games played. He was closely followed by Owolabi Lukeman (20 wins +1171) and Omosefe Prince (who lost to Ogbakpa in the final game) with 19.5points +1369.

Nigeria picked the first 5 spots at the championship in addition to the 8-11th positions. Kenya's Nderitu Gitonga and Mugisha Phillip-Edwin of Uganda were the only non-Nigerians in the top 10 at the end of the championship. All players featured by Nigeria at the event finished within the top half of the field. The only non-Nigerian to have ever won the tournament, South Africa's Trevor Hovelmeier who participated in the event placed a distant 26th. Nigeria also won the Best Team award and the Best Female player award through Mayuku Tuoyo.

Hosts and Past Winners of ASC